Almost 1000 people completed this remarkable migration to New Zealand. They set about the task of establishing a close knit and highly successful Gaelic speaking community in Waipu.

On leaving the Highlands of Scotland after the infamous Highland Clearances, the settlers first formed a community at St Ann’s in Nova Scotia. On this productive land the Scots built a strong community, despite cold winters. 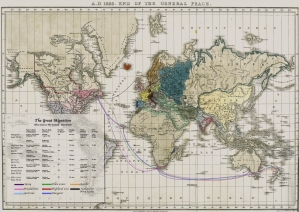 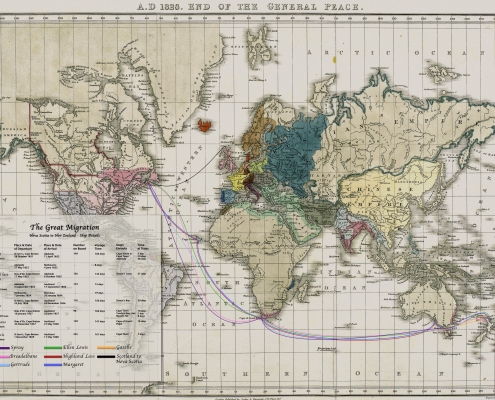 The community at St Ann’s grew under Norman McLeod’s leadership. He attracted self reliant, religious, honest, and intelligent people. They worked hard to harvest timber, build homes, develop productive farms, build ships, establish businesses. Whilst he provided them with what was for many, their first opportunity to gain an education.

Norman McLeod was ordained as a Presbyterian Minister in the United States of America in 1827. His church and congregation were the largest in Cape Breton. He was however a controversial figure.

By the mid 1840’s this was a thriving community. However, by 1845 the very cold winters, combined with potato blight and crop failure created a devastating famine. The fishing industry was under threat, opposing religions were a future challenge and land was limited.

Norman McLeod’s son Donald sent newspapers from Australia in 1848. Norman McLeod and his followers soon learned about the opportunities in Australia. Abundant fertile land, a mild climate and religious freedom were too attractive to ignore. They decided to emigrate to secure a better future for their community.

The Reverend Norman McLeod led his people on a great adventure to Australia in search of a better future.

To undertake this amazing journey they built their own ships, prepared food, settled their affairs and set sail on an expedition, for five months or more, to the other side of the world.

The McGregors also built the 179 ton Brig “Highland Lass” at Inlet Baddeck, Cape Breton for Duncan and Murdoch McKenzie. She set sail to follow the “Margaret” with 136 on board but was caught in ice. They left five months later in spring 1852. By the time they reached Adelaide, some of the “Margaret” group had moved to Melbourne with Rev. Norman and his family.

The “Margaret” was sold and the group were forced to live in Canvas town outside of Melbourne in the midst of violence, crime and disease. Three of Norman’s sons died of typhoid. In Adelaide, the MacKenzie captains sold the Highland Lass and bought the 175-ton Aberdeen schooner “Gazelle” and began trading ventures while the passengers found work.

No suitable land by the sea was found in Adelaide or Melbourne. The discovery of gold caused the demand for land, and its value, to sky rocket out of affordability. The quest for land turned to New Zealand.

The Reverend Norman McLeod wrote to Sir George Grey, Governor of New Zealand, who encouraged him and his people to come to New Zealand.

After 12-18 months the first party left Adelaide for Auckland. Duncan and Murdoch McKenzie with Ninety “Highland Lass” people and 33 from the “Margaret” arrived in Auckland on 18 September 1853 where they initiated land negotiations.

The leaders of that group chose Waipu as being the most suitable area for the new settlement. They were Duncan McKenzie, Duncan Mackay (Ban), Donald McLean, Hector McKenzie, William McKenzie (Beag), Donald McDonald and Donald McLeod.

At last, after many trials, determination and persistence were rewarded. Compared to Scotland and Nova Scotia, Waipu was a land of great opportunity.

At last the community had found land with great potential.

When news of Waipu reached those who had remained in Nova Scotia, others decided to migrate and four ships were prepared for the journey. Some families still stayed in Nova Scotia. It was a heart-wrenching time for those left behind. they lost kinfolk and many of the community’s leaders. In a sad letter John Mcleod wrote:

“We never experienced to the full how far sorrow has made its inroads upon us until we come home after absence to places where we have once been happy and find our friends’ former residence occupied by people that we know not nor care not much about them. While we recognise each old familiar object, we see no longer those who give them all their value in our eyes, every inanimate thing speaks to our eyes but where are those who will wont to speak to our hearts”.

The first ship to make the complete journey from Cape Breton to Auckland was the 217 ton brig “Gertrude”. Built on Prince Edward Island, she was purchased by John Munro and reconditioned for the trip. She arrived in 1856 with 176 people on board. Next came the tiny 107 ton brigantine “The Spray” in 1857 with 96 keen settlers. She was purchased for the trip by Choan, Alex and Archibald Stewart and Angus Matheson.

Then the 224 ton barque “Breadalbane” arrived in 1858 with 160 more people for the settlement. She was built and owned by Charles Campbell.

Finally the largest of the fleet, the 336 ton barque “Ellen Lewis” arrived in 1860 with 235 new immigrants. William Ross was the main owner and she was built at Sydney, Cape Breton in 1855.

Almost 1000 people completed this remarkable migration. They set about the task of establishing a close knit and highly successful community in Waipu and sister settlements

Today, the descendants number in their tens of thousands. The remarkable Waipu Migration has descendants all over New Zealand and the world. Those connections continue to be celebrated. In the words of the late PM Sir Peter Fraser:

“New Zealand has many records of the adventurous voyages and the trying experiences of its hardy and courageous pioneers. Each successive settlement has its history of early trials and vicissitudes , of tremendous difficulties and failures preceding success ………………………….but none excel the story of the Highlanders of Waipu.”